I’ve been lucky to be able to leave the baby at home to attend tapings of The Social, The Marilyn Denis Show and Cityline. Getting tickets to these daytime shows is as simple as filling out an online form.

They asked us to get there at 12:00 for the 1:00 live show. So, we get there at noon and line up outside CTV Studios on Queen St. and are let in to wait in the audience standing room, where there was coat check, music playing, and mirrors for some final touchups. The audience coordinator greets the audience and we “practice” how we should cheer and laugh. It was like a cheerleading session. We’re called by name and let into the studio at 12:50, and there’s more cheering practice and final instructions. They encouraged us to tweet, take photos and post during the show.

Being at the show was obviously different than watching it on TV; it was hard to hear the hosts and sometimes difficult to see around the cameras. I felt like I couldn’t really immerse myself with the content. During commercial breaks, the audience coordinator had little contests like “whoever shows me the strangest thing in her purse, wins a prize.” After the show, a few of the hosts stuck around and took photos with everyone. After the photo op and picking up our gift, we were out of the building by 2:15. 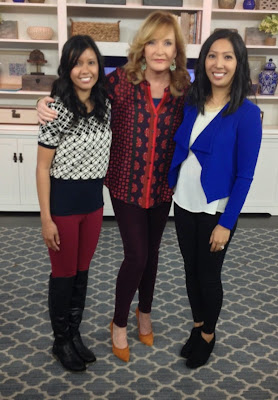 We arrived at the studio at 9:00 for the 10:00 live show. The Marilyn Denis Show is filmed at the same studio as The Social and it was the same audience co-ordinator, so the pre-show experience was exactly the same.

During commercial breaks, we played the same contest as we did at The Social filming. (I should have expected this and carried something strange in my purse, but I had nothing.) After the show, we took photos with Marilyn, picked up our gifts and were out of the building by 11:15.

They asked us to arrive at 9:30. It isn’t a live show, but I assume filming normally starts around 10:00. (They film one week in advance.) We’re let into the audience room where there are tables and chairs. The audience coordinator introduces herself and plays a video of the host, Tracy Moore, explaining the process. They were running behind that day because part of the set didn’t arrive yet so instead of waiting around, Tracy joined us in the audience room and took photos with everyone. Once the set was ready, we were brought into the studio and were seated row by row.

Even though the show wasn’t live, there were still commercial breaks. During these breaks, they would blast music and the audience coordinator would get everyone in the mood to dance. It was like a dance party. The speakers in the studio were loud and clear, so we were able to hear the show perfectly. This definitely helped me get into the show, compared to The Social and The Marilyn Denis Show where it was sometimes a struggle to know what the hosts were saying.

Overall, I enjoy watching The Social on TV, but I had the best experience at Cityline. It was fun and natural; I didn’t feel like I had to be “on” and overly cheerful, as I felt at the other shows.

Stepmother of two and new mother to a sweet baby boy!